Okay, I've started a private group for our discussions on Facebook: The Canon Resurrected Discussion Group. Request to join!

If you're not on Facebook, I do still plan on posting here (and linking on the FB page). Comments will always be welcome here, but the social media format is better for discussion, I think, than the comments on a blog. I also love that members of the group will be able to start posts themselves.
Posted by Susan Raihala at 6:55 PM No comments:

The Comedy of Errors: Act 1

Once upon a time, words were free of the need for speed and clarity and debasement. They gamboled through the meadows of imagination, without dictionaries or grammar critics, rhyming and reasoning as they wished.

In that rich season of language, Will Shakespeare played.

Though it might take a few acts to get back into the proper frame of mind to read The Comedy of Errors without tripping over the past twenty years of practical language immersion, I feel the old ease quickly coming back. If you're struggling as we set out on this adventure, may I make a few suggestions?

First, slow down. If you are reading a well-annotated edition, read the footnotes carefully. If you don't have a well-annotated version, check out No Fear Shakespeare, which has a facing-page modern English version of the early modern English original. I stumbled across it when trying to purchase an ebook version of the play on my Nook, my Complete Pelican Shakespeare being too bulky for my bag. Wary of cheap ebook editions riddled with errors, I sprang for the No Fear Shakespeare. The Shakespearean text is clear and typo free (at least so far), and it's easy to compare a modernized version of sentences that challenge our more rigid modern syntax and less creative vocabulary.

Second, reread. We are taking a month to read a play that's 20 pages long. There's time to read every act or scene over several times.

Third, read it aloud. Trying to put the em-PHA-sis on the right syl-LA-ble (as my sister says) slows you down even more and adds an auditory reinforcement to whatever your eyes are telling you.

If you're having no trouble at all with the early modern English of the play, then I don't like you very much.

As I contemplated what to write for this first post, two points rose to the top.

Villain. What a great word! When we think of villains, we think of Nero fiddling while Rome burned or Voldemort's copious use of the avada kedavra curse or Emperor Palpatine, whose prominence in the ninth episode of Star Wars caused much righteous indignation in the fandom. But in our play, Antipholus of Syracuse (or Antipholus S.) uses the word...unconventionally, to our modern ears.

After his trusty servant Dromio S. departs, he tells the nameless merchant, "A trusty villain, sir, that very oft, / When I am dull with care and melancholy, / Lightens my humor with his merry jests" (I.ii.19-21).

Clearly, Antipholus is using the word quite differently in Scene ii than in Scene iii, when he calls Dromio of Ephesus (or Dromio E.) a "villain" (96) who's stolen his money.

The closeness of these two versions of the word is significant, methinks. English majors get very excited when repetition-with-variation occurs. Sort of like we get excited reading about cigars or staffs or anything remotely phallic. It might mean something.

Villain comes from an old French (or Anglo-French) word typically spelled villein in the middle ages when writers typically spelled words any ol' way they felt like it. In the feudal sense, villein simply meant a servant tied to the land, not quite a slave but not free, either. As often happens, words gather additional meanings over time, and in this case, villain acquired new--and very negative--connotations that eventually became solid definitions. During Shakespeare's time, the word held both meanings and thus enriches the drama (or comedy) of the confused identities that are the heart of this play.

A second point that jumped out at me was the theme of the play. Mistaken-identity comedies are a dime a dozen, and while I knew from reading the Pelican introduction to The Comedy of Errors that it was, indeed, of this subgenre of plays, I still found myself rather arrogantly (okay, very arrogantly) rolling my eyes when the obviousness of the setup during Act 1, Scene i.

My family just finished re-watching The Princess Bride, one of the best movies of all time, and at the beginning a young Fred Savage's sick-boy character gets all shirty with his grandfather (played by Peter Falk) about the old-fashioned book his grandfather brought to read to him. Eventually, the boy gets drawn into the story and begins to care about the characters.

My eye-roll reactions was immediately distasteful to me. I am NOT one of those childish critics, I sternly told myself. I squelched the impulse and judgment, and kept reading in a much more helpful--open and receptive--frame of mind.

The world is much more fun when you're not a prune.

Also, on a bookkeeping note, I'm going to try to create a private Facebook page, which might be easier for most of you to comment and make conversations about the readings easier. My initial attempts didn't yield a private page, however, so it may take a bit for me to figure that out. I'm working on it.

I'm so grateful to the eight people who have verified their email subscriptions! Start reading The Comedy of Errors by the magnificent William Shakespeare as you are able. The first post of my initial reflections will be late this week. You are invited to share your own reflections in the comments of each post.

Civil discourse--including disagreements--will be welcome. Rudeness, however, will not be tolerated. My corner of the interwebs is a pleasant, welcoming, inclusive, and civil place! Trolls will be banished.

I'm feeling my way forward with this project and would appreciate any suggestions for making it more interactive and easier to stick with. Please comment on this post if you have constructive ideas. I want The Canon Resurrected to be as flexible and user-friendly as possible. We all have busy schedules and lots of commitments, but the Canon does deserve our attention!

For now, here's the plan, as far as it goes (which isn't far, admittedly!), and some questions.

1. Weekly posts to this blog about my thoughts on the reading as I've worked through it so far, with an end-of-month summary.

2. A Facebook page might make conversation easier than the comments on a blog. What do you think? At the least, I can post to a FB page so people who don't subscribe via email or blog readers can see new posts. We could make the FB page private to keep out trolls and literary snobs. :-)

3. Do you want a reading schedule or do you want to have a deadline (perhaps 3/4 through each month, with a week of conversation and sharing at the end of each month)?

Again, many thanks for joining me on my little canon crusade! Please let me know your thoughts.

"I would not wish / Any companion[s] in the world but you."

Discarded Books: The Comedy of Errors 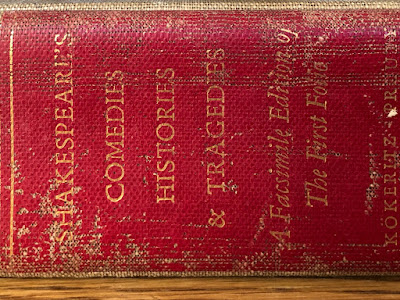 To pore upon a book, to seek the light of truth. --William Shakespeare

This blog--and the project behind it--was inspired by Shakespeare 2020, a reading plan for covering all of Shakespeare's work in one year. After contemplating that plan, I decided to take a slightly different and much less taxing course. Besides, no way am I reading Titus Andronicus again.

You see, I read a lot. Every day. And my choices of reading aren't always the most enlightening. My friend Carrie classifies books as either chocolate or bran: the chocolate books taste good but are full of empty calories while the bran books are good for you and keep your brain regular. The best books, according to the wise Carrie, are chocolate chip bran muffins.

These days, I read more chocolate bars than bran muffins.

It's time to reverse that trend because I believe, with every fiber of my book-loving heart, that great books are great for good reason. They speak to us through the centuries and contain wisdom, advice, and beautiful words that are fresh and fun and important still. When I taught Introduction to Western Literature, my excitement about the classics got students excited about Dante and Marie de France and Sophocles. (Well, let's keep it real: a few of them were excited; I was excited every. single. day.)

I want to find that excitement again. Perhaps you'd care to join me.

My plan is to pick up those discarded books from the literary canon, find anew what they have to say to us, and get excited again. Each month, I'll pick a canonical work or author to read instead of cozy mysteries or popular fiction. I'll take a few notes, share my observations, and welcome your comments. You may join me...or pick a different classic and share your notes with us. Really, I'm not into heavy-handed rules or regulations. I'm into loving books and sharing the love.

Let's resurrect the canon and restart an old conversation.

And we might as well begin with Will because the Bard had much to say and said it well, even if he used words like eek and hark and squatch (which has nothing to do with an American Yeti). Of Will's fantastic selection of plays and poems, let's start with The Comedy of Errors. I have no memory of ever having read it but think the title alone is as good a description of my life--and our modern world--as any other.

Once more unto the breach, dear friends!

Susan Raihala
My name is Susan Raihala, and welcome to my blog! I live with my husband, George, our two boys, and our golden retrievers. My days are spent teaching English composition at Sinclair Community College, volunteering as a Stephen Ministry leader, writing, paper-crafting, and reading. Welcome to my little corner of the internet.